Sky calls for probe into BT’s hold on Openreach 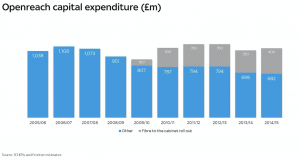 Sky has called on UK competition watchdog the CMA to investigate BT’s Openreach division, accusing it of under-investment in the national broadband network used by Sky to serve its customers.

In a submission to regulator Ofcom’s strategic review of digital communications, Sky called on Ofcom to make a market investigation reference to the CMA and said that “the common thread” to problems with the UK broadband sector was “BT’s ownership of Openreach”, which carried a risk of “diminishgin retail competition as the UK transitions to fibre-based broadband services”.

Sky’s cited BT’s failure to invest in and maintain the network as leading to a wide range of service quality problems. It says over 90% of new line installations, which require an Openreach engineer to attend, take over 10 calendar days and almost one in 10 installations take over 30 days. Sky accused Openreach of changing the agreed installation date for its customers on average around 36,000 times a month and of missing over 500 appointments each month to install new lines for Sky, as awell as failing to complete a further 4,000 jonbs per month.

According to Sky, fault rates across the Openreach network increased by 50% between 2009 and 2012. The broadcaster said that Openreach’s performance in fixing faults is consistently below targets agreed with third-party service providers.

Sky cited research by consultancy Frontier Economics, which it said showed years of declining investment in maintaining the copper network, to back up its claims. It said that capital expenditure on Openreach activities other than fibre had fallen by a third over the last decade.

“The forthcoming Ofcom review is an important piece of work so it is disappointing that Sky are engaging in selective spin rather than constructive dialogue. They claim that Openreach investment is down yet it is up. They can only substantiate their claim by ignoring the billions of pounds we have pumped into fibre broadband,” a BT spokesperson told DTVE sister publication Telecoms.com.

“They also make claims about customer service whilst failing to acknowledge that Openreach has passed all sixty of the service targets it was set by Ofcom. We acknowledge there is more to do on customer service but breaking up BT is not the answer. It would lead to huge uncertainty and fundamentally undermine the case for future investment dragging the UK backwards at the very time it needs important investment in its infrastructure.”