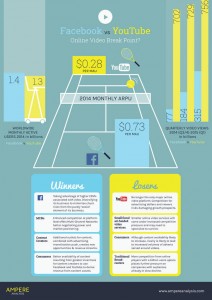 Facebook is making a “serious play” for content owners and looks poised to take on YouTube’s dominance in video content, according to a new research report.

Ampere Analysis said that Facebook’s video views are “rocketing” and that recent trials with content owners like NFL and Fox Sports “suggest it’s primed to become a plausible alternative to YouTube.”

The report claims that Facebook’s video views are “catching up” with YouTube’s and will exceed two trillion this year – two thirds of YouTube’s projected total for the same period.

Ampere said it expects Facebook to trigger an “advertising ‘arms race’” by competing directly against YouTube for user-uploaded video audiences and predicted that it would start to introduce pre-roll ads on some of its video content to improve revenue-return for key content partners.

“As Facebook moves from testing its advertising models to more actively soliciting content creators to join the platform, it will come under increased pressure to match the opportunities and per view returns generated by other platforms – notably YouTube,” said Ampere research director and former IHS analyst, Richard Broughton.

“Ultimately, despite Facebook’s current reticence around offering pre-rolls, it may have to bite the bullet and add them to its repertoire. If the social network’s own video ambitions are to be realised, and if it is to convince content owners it is a viable alternative to YouTube, it must deliver comparable returns.”

According to Ampere estimates, almost 15% of internet users across Western Europe and the US have watched videos on Facebook in the last month, while a sixth of Facebook video viewers have not watched YouTube in the same time period.

At its F8 developer conference earlier this year, Facebook said it would now let viewers watch and interact with Facebook videos from anywhere on the web, with the launch of its new embedded video player. At the same time the social network previewed an “immersive, 360-degree video experience” in the service’s news feed that lets viewers choose the viewing angle to explore your surroundings.

Earlier this year, Facebook reported an increasing shift towards visual content, claiming that in the past year the number of video posts per person has increased 75% globally and 94% in the US. Since June 2014, Facebook claims it has averaged more than one billion video views every day.