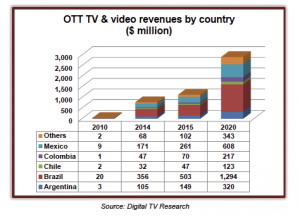 There will be a huge increase in uptake of OTT services in Latin America over the next five years, with regional revenues more than doubling.

Digital TV Research forecasts say OTT revenues will hit US$2.91 billion in 2020. The 2015 forecast is for revenues of US$1.13 billion, meaning a major increase in the OTT sector in the next few years.

The number of SVOD subscribers will increase from 9.9 million to 24 million across the same 2015-to-2020 time period.

Global SVOD leader Netflix has rolled out across Latin America and worked through some of the billing problems it had in the region. There are also other region-wide services such as Movistar as well as an increasing number of country-specific operations.

By territory, Brazil and Mexico will be the biggest earners, according to Digital TV Research. The company’s principal analyst, Simon Murray, said: “SVOD will remain the region’s largest OTT revenue source; contributing $1,745 million by 2020 – up from next to nothing in 2010. Pan-regional services such as Netflix, Clarovideo and Movistar are making an impact and are adding a competitive edge to the SVOD sector.”