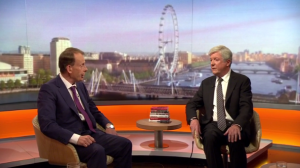 The BBC licence fee model has got “10 years life in it”, according to director general Tony Hall, who agreed that the payment model should be reformed in some way.

Speaking on The Andrew Marr Show over the weekend, Hall agreed with a report by the Commons Culture, Media and Sport Committee earlier this year that said the licence fee will need to adapt, modernise and change.

Referring to John Whittingdale – the report committee’s chairman and recently appointed UK culture secretary – Hall said: “His own report, published before the election, said far from the licence fee being anachronistic, it’s actually got 10 years of life left in it, at least.”

Looking ahead, Hall said that he believed the licence fee should be amended to reflect the fact that people are watching and using the BBC services, but not necessarily from the live, linear TV broadcast schedule.

“The point is I think there’s a broad agreement that the licence fee should be reformed in some sort of way, to make sure everyone’s paying equally for it and I would go along with that,” said Hall.

One option could be a household tax, while the BBC itself has suggested reforms so that “whatever way you consume and use BBC services you can pay for it. I think somewhere in there lies a solution,” added Hall.

The report by the committee of MPs earlier this year said the BBC’s licence fee model is becoming “harder and harder to justify,” with a broadcasting levy on all households a preferred alternative.

It called for “major changes to the BBC’s governance” and “reforms to its funding” in the context of an evolving media landscape.

“In the short-term there is currently no better alternative to the licence fee but as a minimum the licence fee must be amended to cover catch-up television as soon as possible,” said the committee. “A broadcasting levy on all households is the preferred alternative but a degree of subscription for BBC services could be a possibility in the future.”