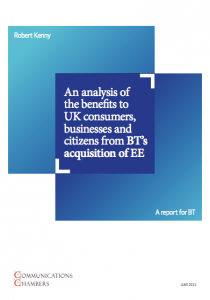 BT has said that its planned buyout of UK mobile operator EE will create a “true UK digital champion” willing to invest in ultrafast broadband and 5G.

BT CEO Gavin Patterson said that consumers and businesses will both benefit from further innovation and integrated services in what is a highly competitive market.

He added that companies operating in the UK would be able to benefit and compete through regulated and equal access to BT’s Openreach network, and wholesale access to the EE mobile network

“The world is changing with customers wanting access to the internet on their terms. They are spending more time online than ever before and they want the best connection whether they are at home, in the office or on the move. Seamless connectivity is the future and we are keen to deliver the new, innovative services of the future,” said Patterson.

He was speaking at the launch of a report titled ‘An analysis of the benefits to UK consumers, businesses and citizens from BT’s acquisition of EE’, which concludes that the telecoms market is contracting and that consolidation is a natural outcome of this.

BT claims that following a merger with EE, the UK market will remain “one of the most competitive markets”, with players such as Virgin and Sky retaining their “powerful competitive advantages over BT/EE and the other MNO”s.

BT also said that a combined business will have lower market shares than incumbents in other European markets, and that BT and EE will continue to operate under “functional separation where it has significant market power.”

The report comes a week after the UK Competition and Mergers Authority agreed to fast-track the investigation of BT’s proposed takeover of EE to phase two, after it identified concerns surrounding the impact any deal may have on competition in UK markets.

BT struck a definitive agreement to buy EE for £12.5 billion (€16.7 billion) in February, in a deal that will see the UK service provider make a major move into the quad-play market.