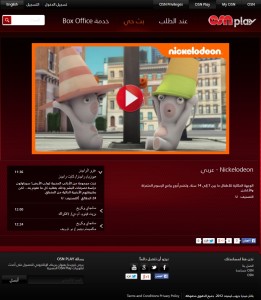 At the same time, Viacom International Media Networks has also created a dedicated regional Nickelodeon website in Arabic and English. The site will include games, video clips and other online content.

In September, it also plans to launch a free dual-language Nickelodeon app for Android and iOS devices, which will include an authenticated zone for OSN subscribers to unlock exclusive content and games.

“The launch of Nickelodeon on OSN Play as well as the upcoming unveiling of the new regional website and app will bring children and families closer to the action on their favourite channel, enabling them to stream the best of Nick’s programmes anytime, anywhere and on multiple devices,” said Emad Marcos, senior vice president for business development, strategy and digital of OSN.

David Urgell, vice-president of strategy and business development at Viacom International Media Networks, South Europe, Africa and Middle East, said: “Our new website launch, our partnership with OSN for OSN Play and the upcoming application provide greater flexibility and access to digital content for both our English and Arabic speaking audiences, as well as added value for the customers of OSN who will have access to exclusive content through our app.’’