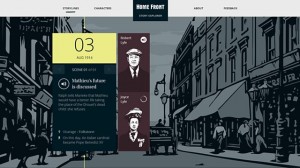 The BBC has launched a new story explorer tool to help users keep track of storylines and character development.

The experimental tool is released publically today as part of a trial around Radio 4 drama Home Front, with the aim of potentially applying it to other TV and radio projects in the future.

The Home Front Story Explorer is an online service that lets users track specific characters, locations or narratives from the series and listen back to relevant excerpts of previous episodes. It also includes pictures by illustrator Ivan Allen and text by journalist Nick Curtis.

“For several years R&D have been interested in looking how to best represent drama and stories on the web,” lead producer, internet research and future services, BBC Research & Development, Tristan Ferne told DTVE.

“We have a number of things looking at how you can ‘atomise’ linear media and break it into the small parts and put it back again in useful ways. This particular prototype we started proper development [on] in about January.”

The explorer tool was developed by BBC R&D and launched through BBC Taster – an outlet for new digital content and emerging technology, dubbed by the BBC as its “home of new ideas.”

Ferne said Story Explorer could be applicable to both radio and TV shows, but it would be down to BBC Digital and specific production teams to test and deploy the service.

In parallel, BBC R&D has also designed a new in-house continuity database to help programme teams to keep track of what happened previously in long-running shows.

“There’s a number of teams that use things like that, so we’ve developed a new modern web continuity base for them to use and we’ve also built it so you can use the same data to power an audience-facing website like this [Home Front Story Explorer]. In principal they should be able to enter that data for their own use, but hopefully then it will be able to power other things as well,” said Ferne.

Home Front, currently in its fourth season, is a daily Radio 4 drama, with each episode set exactly 100 hundred years prior to broadcast during the First World War. The series is planned to last 15 Seasons, detailing around 600 stories throughout the Great War.