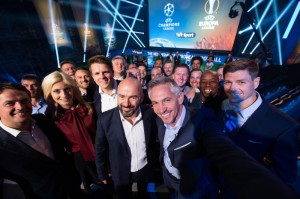 Announcing the plans this morning, the UK operator said that BT Sport Ultra HD will be the first UHD, 4K channel to launch in Europe and will show selected live football matches from the Champions League, Premier League, FA Cup, as well as some Aviva Premiership Rugby fixtures.

The first fixture to be broadcast in 4K by BT will be the Community Shield football match, which is due to take place on August 2. The fixture, which traditionally opens the new footballing season, will see this year’s Premier League winners Chelsea take on FA Cup victors Arsenal at Wembley.

BT said that viewers interested in taking up its Ultra HD offering will benefit from four-times better resolution than standard HD, and its “best-ever YouView+ box” with up 1TB of storage space – the equivalent of 600 hours of standard definition content or 250 hours of HD.

The news came as BT also announced another new sports channel, BT Sport Europe – which it said will be “the new home of top European football.”

BT Sport Europe is due to launch on August 1 and will air all live UEFA Champions League and Europa League football matches.

The channel joins BT’s sport pack – which also comprises BT Sport 1, BT Sport 2, ESPN on BT Sport. The sports line-up is free to customers that subscribe to BT TV and BT Broadband, while BT Broadband customers without BT TV can get the sport pack for £5 a month.

“When we launched BT Sport we promised to make televised football far more accessible and affordable than it has been to date. We have opened the market to millions of new customers and we want to build on that as BT Sport becomes the undisputed home of European football,” said John Petter, chief executive of BT Consumer.

“We are of course giving our best offer to existing customers – broadband customers will get the new BT Sport Pack for the heavily discounted price of £5 whilst customers who take broadband and TV from us will get it absolutely free. This is a new chapter for European football on TV. BT Sport will show hundreds of live matches throughout the tournament using the very latest technology.”

BT shares Premier League football rights with its main rival Sky, which retained the bulk of live Premiership matches in an auction earlier this year, paying a record £5.14 billion for the three seasons from 2016/2017.