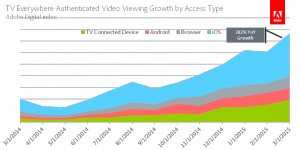 One in four authenticated video streams from TV everywhere services came from a connected TV device in Q1 – up from just one in 20 a year ago, according to new research.

The new report by Adobe Digital Index (ADI) claims that larger screens are helping to “close the gap in video viewing frequency” between mobile devices and desktops.

“Overall, connected TV devices, such as Apple TV, Roku, and gaming consoles, such as Xbox, saw dramatic TV Everywhere share growth, from 6% to 24% year-on-year. These devices have taken share away from Macs and PCs; marketers need to take note and adjust strategies accordingly,” said ADI.

In total, Apple devices were found to drive 62% of all authenticated pay-for-TV video views, with Apple widening its lead of viewing share from 43% to 47% year-on-year, while Android’s share remained relatively flat at 15%.

“When it comes to digital video, people are either watching on a portable device or on a high-fidelity screen. It looks like desktops are losing the battle in the home, bringing the TV Everywhere viewing platform full circle and returning viewers to the living room,” said Tamara Gaffney, principal analyst at ADI.