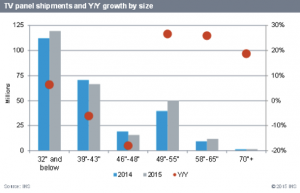 Shipments of 4K TV panels are due to reach a record 40 million units in 2015, up 108% compared to last year, according to new research from IHS.

It also predicted 27% year-over-year growth for larger TV displays of 49-inches to 55-inches and 26% growth for 58-inch to 65-inch display shipments.

Overall, IHS said that TV panel shipment targets will reach a historic high in 2015, growing 5% year-on-year to a record 265 million units. This is despite the strengthening dollar against other currencies, especially Commonwealth of Independent States countries and emerging markets.

“Global first-tier TV brands, like Samsung and LGE, are sticking to their aggressive shipment plans for 2015, while Samsung Display and LG Display have less room to increase volume to meet area demand from their captive customers’ demand for larger TV panels,” said Yoonsung Chung, director of large-area display research at IHS.