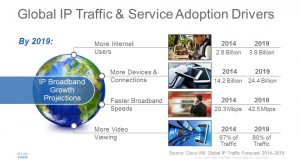 Annual Internet Protocol (IP) traffic will triple between 2014 and 2019, with video to account for 80% of global IP traffic by 2019, according to research by Cisco.

The firm’s tenth annual Visual Networking Index (VNI) Forecast claims that global IP traffic will reach 168 exabytes per month by 2019, up from 59.9 exabytes per month in 2014, after growing at a compound annual growth rate of 23%.

These gains will be driven by global increases in internet users, personal devices and machine-to-machine (M2M) connections, as well as by faster broadband speeds, and the adoption of advanced video services, according to the forecast.

“It took 32 years – from 1984 to 2016 – to generate the first zettabyte of IP traffic annually. However, as this year’s Visual Networking Index forecasts, it will take only three additional years to reach the next zettabyte milestone when there will be more than 2 zettabytes of IP Traffic annually by 2019,” said Cisco’s vice president of service provider products and solutions marketing, Doug Webster.

IP video will account for 80 percent of all IP traffic by 2019, up from 67% in 2014, according to the study, thanks to the evolution of advanced services like Ultra High Definition and 360 degree, spherical video – as well as “increasingly video-centric M2M applications”.

The VNI forecast predicts that there will be 24 billion networked devices/connections online by 2019, compared with 14 billion in 2014, due to an “influx” of sophisticated devices including tablets, smartphones, internet-enabled ultra-high definition TVs, and wearables like smart watches and health monitors.

Citing figures provided by the United Nations’ department of economic and social affairs, it added that there were 2.8 billion internet users, or 39% of the world’s population, in 2014, and by 2019, there will be about 3.9 billion web users, or 51% of the projected global population.