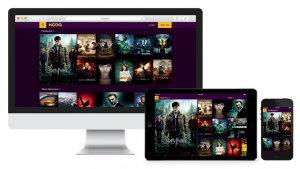 Sony, Warner Bros. and Singtel-backed SVoD service Hooq is about to launch in India one of the international markets where Netflix has yet to roll out.

The Indian launch has now been confirmed and a beta version launches today ahead of a full roll out next month. Priced at RS199 per month, Hooq will have a line-up of Hollywood movies from partner studios and third parties.

It will also have US TV series. Across features and TV, it claims a 10,000-15,000 strong line-up and titles include Harry Potter, Friends and Gossip Girl.

The monthly sub allows customers to watch Hooq’s shows on up to five connected devices. The service is run by former Globe Telecom and Virgin Mobile Australia boss Peter Bithos.

At Hooq’s launch he said: “We are starting this venture to change the way people across Asia view entertainment. Today, across developing markets, there is limited access to quality entertainment, streamed directly to the screen of one’s choice. It’s either illegal, high cost or difficult to get. We aim to fix that.”

SVOD leader Netflix has been expanding rapidly outside of its domestic US market. It has never specifically talked about an Indian launch, but has committed to rolling out in almost all major international territories within two years, suggesting it is inevitable.