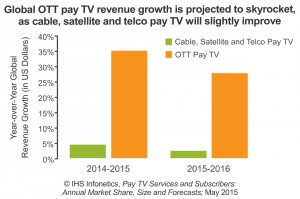 Global over-the-top (OTT) pay TV revenue is tipped to “skyrocket” in the coming years, according to the 2015 IHS Infonetics Pay TV Services and Subscribers report.

The study claims that over the five years from 2014 to 2019, OTT pay TV services will have the highest compound annual growth rate (CAGR) of any pay TV service, with pay TV providers embracing OTT and “skinny bundles” to fend off cord-cutting.

“The net result of these offerings will be slower revenue growth globally as OTT services carry a lower ARPU. Pay TV providers are also actively marketing ‘skinny’ bundles of 10 to 30 channels in more affordable packages.”

IHS said that global pay TV subscribers ballooned to nearly 800 million in 2014, up 5% year-on-year, and that for the first time the OTT pay TV segment provided the strongest growth.

Cable pay TV revenue growth was found to have slowed to 1.8% last year, which IHS attributed largely to “sluggish subscriber growth in North America”, where net video subscribers are declining by roughly 1% to 3% annually.

In total, the global pay TV services market – including cable TV, satellite TV, telco TV and over-the-top video, totalled US$237 billion in 2014, up 7% from the previous year, according to the report.