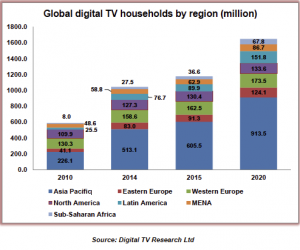 The global number of digital TV homes will increase by more than 1 billion between 2010 and 2020 to reach 1.65 billion, driven by gains in the Asia Pacific region, according to new research.

Sub-Saharan Africa was also identified as a high growth region. Here the number of digital TV homes will more double from 27.5 million in 2014 to 67.8 million in 2020.

Over the same time period the number of digital TV homes in Latin America will climb from 76.7 million to 151.8 million, while China will be the biggest single digital market in 2020 with 454.3 million digital TV homes.