Three in 10 UK viewers say TV programming is getting worse 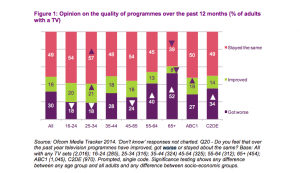 Three in 10 adult TV viewers in the UK said they felt that the quality of TV programmes had gotten worse in the past year, according to new research by Ofcom.

The UK broadcast regulator’s latest report on audience attitudes to TV and radio found that around 16% of those surveyed thought TV had improved and 49% felt the quality of programming had remained the same over the previous year.

Among those that thought TV shows had gotten worse, the top reasons were repeats at 57%, a lack of variety at 43%) a “general lack of quality” at 32% and too many reality shows at 30%.

“Most people (79%) had not been offended by anything on TV in the past year. However, one in five had found something offensive, rising to a third (33%) for people aged 65 and over. Those aged between 16 and 24 were least likely to be offended (9% compared with 33% of over 65s),” said Ofcom.

Of those who had been offended, bad language at 44%, violence at 41% and sexual content at 41% were found to be the top concerns.

Elsewhere, the research found that, on average, the households surveyed owned two TV sets and that 44% of adults had used an internet connected TV in the past 12 months – most via set-top boxes such as TiVo or Sky.