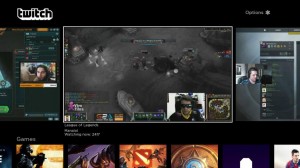 Amazon-owned video platform for gaming enthusiasts, Twitch, has launched as a channel on Roku devices in Europe and North America.

The free-to-view channel is available for all current-generation Roku players in the UK, Ireland, US and Canada, and Roku TV models in the US and Canada.

Viewers can tune into the channel to watch live videogame broadcasts, just like on the web. They can also browse live channels and games and follow broadcasters, adding them to their home screen.

“At any given time you’ll find hundreds of live broadcasts from popular games including League of Legends, Counter Strike, Hearthstone: Heroes of Warcraft, Minecraft and many others,” said Roku’s vice-president, content acquisition, Ed Lee, in a blog post.

Amazon agreed to buy Twitch for US$970 million (€847 million) in cash in August 2014. The service launched in June 2011 and is used by gamers to live-broadcast, watch and chat about videogames, with users able stream their gameplay direct from their connected Xbox or PlayStation consoles.

As well as individual gamers, the site is also used by publishers, developers, media outlets, conventions and e-sports organisations.