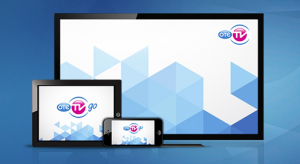 The service includes OTE Replay TV catch-up content and OTE Cinema On Demand. The service has been launched as a pilot to 50,000 subscribers, allowing them to install the app in up to two devices and view content either via their home WiFi network or on the go via WiFi, and 3G and 4G on the Cosmote network.

The app is currently available via the Google Play and Apple App stores.

“With OTE TV GΟ we enhance our subscribers’ TV experience by offering the option to enjoy top quality content wherever they are via broadband network, fixed and mobile. The service has been developed with high quality standards in order to provide multiple possibilities as per each user’s profile. Today, OTE TV GΟ is available via smartphones and tablets, while very soon our subscribers may also use their desktops or laptops,” said Nikos Kallianis, OTE TV Senior Manager in Product Marketing & Commercial Planning.

Separately, OTE has renewed an exclusive deal to air Germany Bundesliga football for the next two years. OTE will air matches from top two German divisions as well as the Supercup and playoffs in each of the leagues.