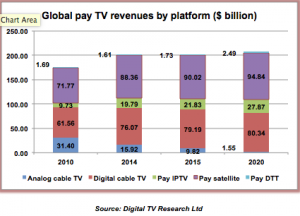 The forecast, which covers 138 countries, claims that pay satellite TV revenues will reach US$90.02 billion (€80.34 billion) this year, compared to US$89.01 billion for cable TV – of which US$79.19 billion will come from digital cable and US$9.82 billion from analogue.

“Global cable TV revenues peaked at US$93.8 billion in 2012, and will fall to US$81.9 billion in 2020. However, cable operators will gain extra revenues by converting subscribers to bundles. Analogue cable TV revenues will plummet by US$14.4 billion between 2014 and 2020 to only US$1.5 billion,” according to Digital TV Research.

However, it did predict that pay TV revenues will more than double in 33 countries between 2014 and 2020, with most of the fast growing nations to be found in Africa.