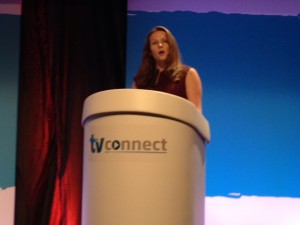 Liberty Global-owned UK cable operator Virgin Media will build on its recent launch of dynamic ad insertion on its video-on-demand platform with a wider addressable advertising offering within the next year, according to Lynette Turnbull, head of digital entertainment product management.

Taking part in a joint presentation at TV Connect with advertising technology partner BlackArrow’s CEO Nick Troiano, Turnbull said that the initial launch had laid the basis for the use of more third-party data to be integrated in the advertising offering in the next 12 months, with the launch of further addressable advertising service options for later this year.

Turnbull told TV Connect attendees that digital advertising is growing faster than TV advertising thanks to the ability  to measure the effectiveness of campaign performance and the rise of big data, which has enabled much greater targeting capability.

She said that broadcasters needed to embrace big screen video-on-demand, expanding their offering and investing in an effective and deliverable monetisation strategy.

“We need an effective audience measurement standard,” she said, adding that, from a platform perspective, Virgin Media will pay a role in supporting this

She said Virgin Media had usage data and customer data along with multiplatform reach, allowing it to bring additional benefits to advertisers. She said this was not limited to addressable advertising on VoD but could be developed for linear ad dynamic ad insertion as well.

Turnbull said advertisers would buy spots against segmented audiences, as this enabled them to provide more relevant information to customers. Addressable advertising stands to benefit all players in the chain, including platforms, advertisers, broadcasters and viewers she said.

Virgin Media’s partnership with BlackArrow had enabled it to bring in additional features such as ad pacing, frequency capping and real-time reporting to its advertising offer, said Turnbull.