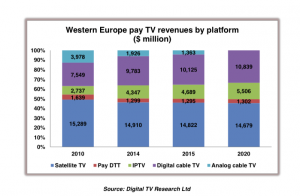 The number of pay TV subscribers in Western Europe is due to climb in the coming years, with cord-cutting “not expected to make much of an impact,” according to Digital TV Research.

The Digital TV Western Europe Forecasts report claims that between 2014 and 2020 the number of pay TV subscribers in this market will climb by 8.7%, reaching 104.8 million.

However there are indications that the rate of growth will slow down over time, with the number of pay TV subscribers expected to climb by 2.57 million this year alone, reaching 99.0 million subscribers.

“ARPU is falling in most countries and on most platforms. The pay TV arena is becoming more competitive as newer platforms (especially IPTV ones – but also including OTT/SVOD) launch. Greater competition means cheaper channel packages. Bundling increases overall ARPU for operators, but leads to lower TV ARPU.”

Satellite will still account for the majority of pay TV revenues in 2020, but these revenues will fall every year having started a downwards progressing in 2011, according to the research.

The UK will still be the most lucrative pay TV market by 2020, even though Germany has the most pay TV subscribers “by some distance”, according to the report.