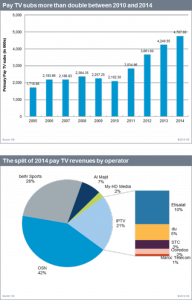 IHS said that the numbers mean the MENA region is the fastest growing globally in terms of pay TV.

“This is the largest increase in revenue globally,” said report author Constantinos Papavassilopoulos, senior analyst at IHS Technology and author of Middle East & North Africa Pay TV Market Monitor. “The MENA region represents huge opportunities for investors. If we look at the demographics alone, over 60% of the population is under 35, they are media-literate and have developed international tastes in TV content.”

IHS forecasts that between 2015 and 2019, that MENA pay TV will grow five times faster than the rate of the US, UK, Germany, France and Italy.

Efforts to curb piracy, better quality pay TV offerings, investment in local content and coverage of the World Cup all boosted the MENA numbers in 2014.

“As we look forward, we see that the region has a strong anti-piracy stance and excellent communication infrastructure that will facilitate the expansion of pay TV networks and the offering of premium pay TV,” Papavassilopoulos said.