Streaming overtakes live viewing in the US 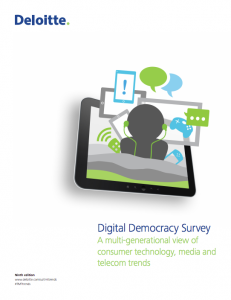 Streaming content has overtaken live programming as “the viewing method-of-choice” among Americans, according to Deloitte’s latest ‘Digital Democracy Survey’.

The ninth edition of the research report claims that, on a monthly basis, 56% of US consumers now stream movies and 53% stream TV, compared to 45% who prefer to watch TV programs live.

Some 68% of respondents were also found to ‘binge-watch’ three or more episodes of a given programme in one sitting, with 31% of Americans doing so on a weekly basis.

“Personal viewing experiences and the ability to consume media at your own pace is significantly impacting how US consumers value their content devices and services,” said Gerald Belson, vice chairman, Deloitte and US media and entertainment sector leader.

“Today, binge-watching, and the ability to watch what we want, when we want, and where we want, is an exciting cultural phenomenon that is shifting consumer behaviours and attitudes towards curating an individual experience.”

The survey found that the internet was the most valued service to an overwhelming 93% of millennials. Despite this, 58% of millennial internet subscribers said they still value pay TV, with 22% of those who don’t currently own a television planning to purchase a new television within the next 12 months.

However, a quarter of millenials also said they had either cancelled their pay TV subscriptions in the last 12 months or hadn’t had pay TV for more than a year.

The research surveyed more than 2,000 consumers, aged 14 and older in the US to assess technology, media, and telecommunications consumption trends.