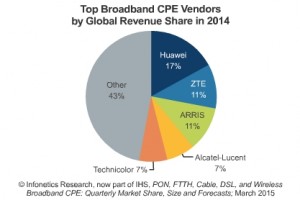 The global broadband consumer premises market was worth US$10.5 billion (€9.9 billion) last year, up 9% on the 2013 figure, according to Infonetics Research.

According to IHS-owned Infonetics Research’s PON, FTTH, Cable, DSL and Wireless Broadband CPE report, the figures were boosted by growth in the FTTH segment, up 18%, with DOCSIS 3.0 equipment sales growing by 3%. The group said that growth had been seen from GPON and DOCSIS 3.0 sales in North America, GPON sales in China, Europe and Latin America, and VDSL sales in Europe.

There was some sign of growth tailing off towards the end of the year, with fourth-quarter revenue from broadband CPE coming in at US$2.7 billion, flat quarter-on-quarter.

Infonetics Research predicts that DSL will take a smaller share of sales as telcos migrate to FTTH or, in some cases, forego fixed infrastructure altogether in favour of LTE.

Top broadband CPE vendors in terms of market share were Huawei with 17%, ZTE and Arris with 11% each, Alcatel-Lucent with 7% and Technicolor with 7%.