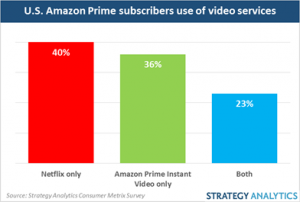 Amazon Prime subscribers in the US are more likely to use Netflix than Prime Instant Video to access video content, according to new research by Strategy Analytics.

The report claims that 63% of Amazon Prime subscribers used Netflix in the previous month compared to 59% who used Prime Instant Video.

On a weekly basis, 44% of US Amazon Prime subscribers were found to use Prime Instant Video at least once, compared to 55% in Germany and 54% in the UK.

“In contrast to countries such as the UK and Germany, Americans are more likely to subscribe to Amazon Prime for free two-day shipping than for Prime Instant Video,” said Strategy Analytics digital media analyst, Leika Kawasaki.

She claims that Americans are “twice as likely as Britons” to cite free two- day shipping as ‘very important’ in deciding to subscribe to Amazon Prime.

“Amazon is needlessly ‘losing’ users to Netflix when, in fact, it should be eating into their user base. Amazon Prime offers subscribers multiple benefits, there are more Amazon-capable devices and the subscription is slightly cheaper. Yes, Prime Instant Video has been lagging behind Netflix in original programming but it’s been making significant moves to address this recently,” said Kawasaki.

“One avenue is to entice more people to use Amazon devices, such as the Kindle and Fire TV, as owners of these are 10% more likely to use Prime Instant Video regularly. However, this won’t be easy, Amazon has not had the same level of success as Apple in creating a unified ecosystem of device and services.”