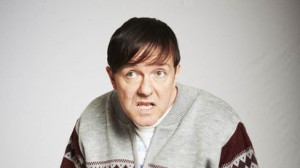 Ricky Gervais as Derek, in the same-titled Channel 4 comedy series.

The film will be available worldwide on the video streaming service and will star Gervais and Eric Bana, who plays an arrogant but struggling New York radio journalist who starts to fake front-line war reports when his job is at risk.

Gervais said: “Having shaken up the TV industry, Netflix is about to do the same to Hollywood. It’s great to be part of the changing future. Ted Sarandos is the new Godfather of entertainment and he made me an offer I couldn’t refuse.”

The film is a co-production between Bron Studios and Unanimous Entertainment.

Separately, Netflix has ordered another original series, a sketch comedy show staring Bob Odenkirk (Better Call Saul) and David Cross (Arrested Development). With Bob and David will appear on the site as four half-hour episodes and a one 60-minute “making of” special and is being produced by Abso Lutely Productions.

Netflix is also reported to have green-lit a fourth series of its acclaimed political drama House of Cards.