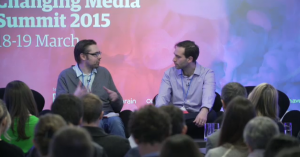 Twitch, the Amazon-owned video platform and gaming enthusiasts, will replace traditional TV services in the future as a major destination for big-screen entertainment, according to founder and CEO Emmett Shear.

Speaking at the Guardian Changing Media Summit in London yesterday, Shear agreed that in the future he could imagine viewers tuning in to Twitch on their TV sets instead of Sky or the BBC, citing Twitch’s existing presence on TV platforms like the PlayStation and Xbox games consoles.

“Thanks to things like Chromecast and Apple TV we have the opportunity for everyone that uses that mobile device to actually throw it [Twitch] up on the big screen,” said Shear.

“What we’ve seen is that those features are actually very heavily used and there’s a lot of demand for that. So I think over time, we’ll see literally Twitch replacing your television in a sense – it will be the thing that you put up on the big screen.”

Twitch lets users to broadcast and tune-in to videogame footage, but has recently also stared airing poker tournaments and experimenting with live music and concert coverage.

With the popularity of online poker, Shear said that he sees this as “just another videogame.” However, he acknowledges that “music is definitely different” and its interest in offering this came from the “constant interest” in music from its community of users.

“I think that we’re very cautious to try to bring cool music stuff to our existing community that they want, rather than trying to push something that doesn’t make sense for our community on them. But I hope over time we have great music content as well,” said Shear.

Amazon agreed to buy Twitch for US$970 million in cash last August, in a deal that Shear said made sense for both companies.

“What does Amazon bring to the table? They bring an amazing retail operation in gaming where they sell videogames really effectively. They bring an amazing platform for producing videogames [Amazon EC2], and what Twitch brings to that is this missing piece of the puzzle, which is a community. Amazon just did not, prior to buying Twitch, have a big community of gamers,” said Shear.

“We got access to a bunch of things through being purchased through Amazon that would have taken us a very long time to build ourselves if we ever actually did. So it’s really actually worked out very nicely.”