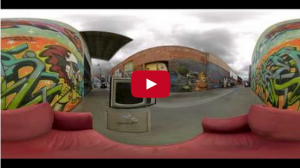 YouTube has started to support 360-degree video uploads, allowing viewers to control the angle and point-of-view of supported video clips.

The new feature will let users that are watching videos on the YouTube app change the angle of the video by moving around their phone of tablet.

The same functionality is available via desktop on the YouTube site, or on embedded videos in the chrome browser, with users able to change angle by clicking and dragging on the video.

YouTube said that it is working to add the functionality to the iPhone, iPad and other devices soon.

“To make it easy for you to create and upload 360-degree videos to YouTube, we’ve been working with companies across the industry,” the firm said, in a blog post announcing the update.

YouTube currently supports 360 degree videos with 24, 25 or 30 frames per second, with support for higher frame rates due to follow soon.

To upload a video in this format, YouTube users must include specific metadata needed for 360 playback. They can do this by using a 360 Video Metadata app YouTube has released for Mac or Windows or by running a Python script on the video file.

The test video featuring this functionality let viewers click different thumbnails during playback to switch to multiple camera views – but did not allow for full 360-degree control over the camera angle.

In other YouTube news, Variety reported last week that YouTube is “exploring the prospect” of launching its own SVoD service, based on its YouTube Music Key service that launched in beta last year. YouTube has not publicly discussed the move, which could see it take on the likes of Netflix.