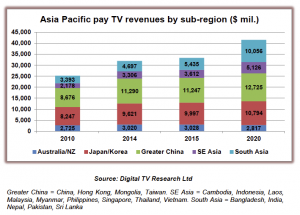 Pay TV penetration in Asia Pacific will rise from 59.0% of TV households in 2014 to 68.4% in 2020, representing growth of 142 million subscribers, according to Digital TV Research.

China is tipped to account for 323 million pay TV households and India 179 million by 2020. Combined, China, India and Japan are expected to account for two-thirds of the region’s pay TV revenues by the same year.