Most North American TV viewers only watch up to 10 channels 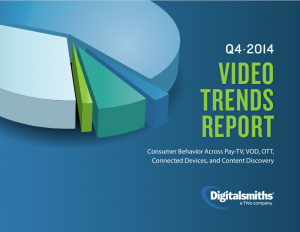 The majority of North American TV viewers only watched between one and 10 TV channels in the Q4 2014, raising “alarming” questions about the future of pay TV subscription packages, according to new research.

The Q4 2014 Video Trends Report, by TiVo-owned search and recommendations provider Digitalsmiths, said that while the number of viewers who watched a maximum of only 10 channels was down by 1.6% year-on-year, the figure still stood at a massive 78.7% of survey respondents.

“While respondents watched more channels in Q4 2014, this is still alarming because now the question arises, ‘Will subscribers continue to pay US$80 to US$100+ per month for 10 channels, considering the alternative options that are now available?’” said the report.

The Digitalsmiths research said that consistent with previous quarters, 31.6% of respondents feel “overwhelmed” by the number of channels available to them, and 85.1% “watch the same channels over and over.”

The study found that respondents watched “slightly less live TV than previous quarters,” with 26.5% now claiming to watching less than 1 hour
per day.

At the same time, pay TV providers were found to “still struggle to get subscribers to leverage their VOD offerings”, with 69.3% of survey participants renting zero movies from their provider each month.

Some 36.0% were found to use these services one to five hours per week.

“Digitalsmiths believes 2015 will be the year to determine whether OTT really disrupts the pay TV market. One potential game changer could be services such as the recently launched Sling TV, which consists of a variety of channels, including ESPN and ESPN 2 for US$20 per month,” according to the report.

“This is a strategic, multi-platform offering by Sling TV in an effort to possibly go after cord-cutters; it will be interesting to see if other traditional pay TV providers follow their lead. We regularly hear consumers tell us they would ‘cut the cord’ if it weren’t for losing ESPN.”

The report surveyed 3,048 consumers aged 18 and over in the US and Canada.