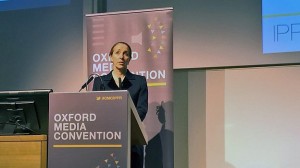 BBC Trust chairman Rona Fairhead has called for the body she heads, which is charged with regulatory oversight of the BBC, to be scrapped and replaced with an external regulator after the public broadcaster’s Charter renewal in 2016.

Speaking at the Oxford Media Convention, Fairhead highlighted the “complicated area of governance is the oversight of financial and operational management and strategy” as the key area of consideration, and said that “the strongest case for more significant change is in this area of oversight, where a fault line continues to lie in the blurred accountabilities between the Trust and the Executive board”.

Fairhead said that the Trust had worked with the executive board to “clarify the boundaries” between the pair and said she was “confident” that the existing regime could be make to work to the end of the current BBC Charter. However, beyond that, she said that the complete separation of regulation from management and the creation of a dedicated external regulator would be the best option.

“Responsibilities for strategy, financial and operational management need to sit with the BBC Executive – to allow them to respond to a rapidly changing environment. Responsibilities for regulation and broader accountability need to sit at one remove. That way, there should be no possibility of vagueness or uncertainty about who will be held responsible for what, when the chips are down,” said Fairhead.

“At a minimum, we would want to propose some reform of the current model. To keep the Trust as part of the BBC but to be much more specific, in any future Charter, that its responsibilities were focused more clearly on regulation and accountability, with strategy and oversight left to the Executive Board. But the cleanest form of separation would be to transfer the Trust’s responsibilities for regulation and accountability to an external regulator. And that’s an approach we want to explore further. I think it’s the front-runner.”

Fairhead said she had some concerns about the culture Select Committee’s call for a Public Service Broadcasting Commission with wider responsibility, as this would not have authority to set BBC service licences, while “carving up the licence fee” could weaken “the direct line of ownership and accountability that runs between the public and the BBC”.

Fairhead has attracted media attention recently over her role as a non-executive director of scandal-hit bank HSBC. The BBC Trust has said there was no conflict of interest between her roles at the two organisations and that the Trust had no input into BBC coverage of events at HSBC.

Delivering his own speect at the Oxford Media Convention, digital economy minister Ed Vaizey said the government would not launch a debate on BBC governance and the Charter Review ahead of the general election, “except to confirm that we ‘heart’ the BBC”.

“We want to see a BBC that is fit for the digital age, able to fulfil the many roles that the BBC has done so successfully for many years – not just great content, but education and training, technical innovation, and a huge and irreplaceable contribution to civic society,” he said.

Vaizey also said that a digital single market across the EU would benefit the UK, which is home to over 500 broadcasters. “Major companies like Discovery, Disney and Viacom not only employ thousands of people here, they are major investors in UK content. We want to give them reasons to continue to invest here,” he said.