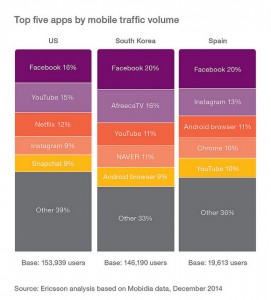 Total mobile video traffic in the next six years will be around 17 times that of last six years, according to the latest Ericsson mobility report.

The global research, published ahead of Mobile World Congress next week, claims that two-thirds of app data traffic over mobile networks comes from just five of the most popular apps in each country studied, with video streaming and social networking dominating.

While Facebook was found to be the number one app in each country studied, mobile video “dominates traffic growth”, with Ericsson forecasting it to grow by around 45% annually through to 2020 when it will account for around 55% of all mobile data traffic.

“Prominent factors driving this rapid growth include increased number of video-enabled devices, larger screens, and better picture quality. Another prominent driver is that video is becoming an increasing part of online content, such as news, adverts, and social media. Video is increasingly shared via popular social sites, such as Twitter,” said Ericsson.

Breaking down mobile traffic volume in a few key markets, Ercisson said that in the US in December Facebook accounted for 16% of mobile traffic, followed by YouTube at 15% and Netflix at 12%. In Spain the most popular apps were Facebook and Instagram with 20% and 13% of traffic respectively.

The study also noted a decline in the numbers of people watching broadcast TV, at the same time that streaming services gain more traction.

“This year for the first time more people will watch streamed on demand video than broadcast TV over a weekly period in those markets. Drivers for this change include the advent of 4G technology, the growth in smartphone and tablet usage, and a shift in consumer behaviour towards easy-to-use, on-demand services that offer cross-platform access to content,” said Ericsson.