Denmark ‘most digital country’ according to EU stats 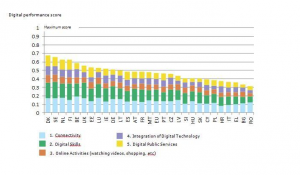 Denmark is ‘the most digital country’ in Europe, according to new stats released yesterday by the European Commission, which has made moving to a “fully-fledged digital single market” one of its top priorities.

According to the Digital Economy and Society Index, Denmark had an overall score of 0.68 (out of 1) and ranked first of the 28 EU member states, with the country boasting the most advanced use of digital public services.

Danes were also found to be among “the most intensive users of video-on-demand and on-line shopping,” with 74% of households with TV accessing broadband-delivered video-on-demand.

Some 57% of Swedes were found to access music, videos and games over the web, 52% made video calls, while 44% of TV households accessed VoD.

The Netherlands came in third place with a score of 0.63, with fast internet available to 98% of Dutch households and the Dutch appearing to “particularly make use of internet banking and shopping, video on demand, and IPTV.”

“The Digital Index shows how radically people have changed the way they watch films: they still follow their favourite series on TV but a considerable number – 40% – watches also video on demand and films online. We need to adapt to citizens’ needs and we have to think about adapting our policy,” said Günther Oettinger, commissioner for the Digital Economy and Society, whose home country, Germany, came 10th in the rankings.

Speaking at the #Digital4EU stakeholder forum in Brussels this week, European Commission vice-president for the Digital Single Market, Andrus Ansip, whose native Estonia ranked seventh, said that building a digital single market in Europe means “building the long-lasting foundation for our digital future.”

Among Ansip’s stated “ideals” were: no discrimination based on nationality or unjustified geo-blocking; a single contract law for online transactions to provide clear and safe rules for buyers and sellers; and a single data protection regime and a clear system for data access.