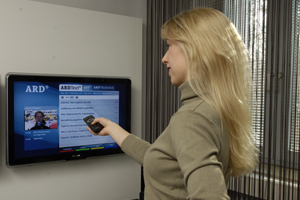 The HbbTV Association has released the specification for Hbb 2.0, paving the way for a “new wave of consumer TV services.”

HBB 2.0 will support HTML5, MPEG-DASH and advanced video delivery features like Ultra HD and HEVC, with the first compliant receivers expected to be released during 2016.

Using the same DIAL technology as Chromecast, viewers will be able to use a tablet or smartphone to browse for video content and launch an HbbTV application to watch this content on the TV screen, according to the specification.

Other new features include: standardised delivery of Ultra HD content with HEVC; improved accessibility of services with better support for subtitles in multiple languages; access to broadcast content captured to local storage in the receiver; and advanced user experiences based on HTML5.

“With HbbTV 2.0, consumers will be able to explore a richer, more immersive experience with new applications, exciting user interfaces and support for companion devices. This is an important milestone for the industry and represents the efforts of HbbTV Association members who have worked to define the specifications for the next wave of TV based on HbbTV.”

An HbbTV test suite is expected to become available in 2016, allowing for the launch of HbbTV 2.0 compliant products and services by manufacturers, broadcasters, and operators later the same year.

The HbbTV Association is a global initiative dedicated to providing an open standard for the delivery of broadcast and broadband services through connected TVs and set-top boxes.