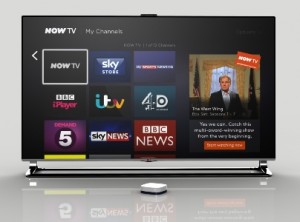 Speaking on Sky’s earnings call yesterday, group CEO Jeremy Darroch said that there were further opportunities for the newly expanded Sky to “really get behind” its OTT offerings in each of its territories and “transform some of the learnings from the UK into Italy and Germany.”

Following Sky’s Germany launch in December of a Roku-powered streaming media box to let viewers access Sky Online and Snap on their TVs, Darroch said that it now planned to launch “a similar box” in Italy. Sky first launched its Roku-powered Now TV box to compliment its UK over-the-top offering back in July 2013.

Discussing Sky’s plans for Now TV in the UK, Darroch said that in the next few months it would launch a “major marketing campaign” for the service and roll out a new look and feel for the brand.

“We’ll be updating our user interface to drive engagement and consumption and we’ve got an outstanding line up of new exclusive content, which will bring to the next generation of Now TV box which will also upgrade later in the year,” said Darroch.

It also said in a presentation to investors that it planned to push the service harder in 2015 with the brand campaign, more marketing support and the upgraded user interface and experience.

“As penetration of connected devices increases, Sky is opening up new revenue streams. Revenues to Sky Store in the UK and Ireland were up 90% year on year with ‘buy and keep’ now regularly ranked number one or two among digital retailers for new releases,” said Sky in its earnings report.

Separately, it was reported earlier this week that Sky is planning to launch a next-generation set-top box for its pay TV subscribers in the spring that will support ultra high-definition, 4K content.

Sky’s footprint now spans the UK, Ireland, Germany, Austria and Italy after Sky completed its acquisition of Sky Italia and 95.8% of Sky Deutschland at the end of last year.