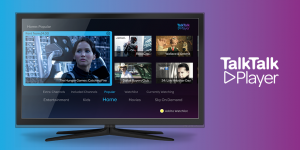 UK service provider TalkTalk reported its “strongest ever quarter” for combined uptake of its TV, mobile and fibre broadband offerings in its fiscal third quarter.

Announcing its results for the three months from September to December, TalkTalk said that 115,000 more homes signed up to TalkTalk TV, 50,000 took mobile and 88,000 signed up to fibre broadband in the quarter.

Its TV service now claims 1.3 million customers, a third of TalkTalk homes, and TalkTalk claims it remains the fastest growing TV service in the UK.

The service provider added that its recent acquisition of digital movie and TV service, Blinkbox Movies will “accelerate development of TalkTalk TV by delivering key services significantly faster, such as a TV app to customers for in and out of home viewing on multiple devices.”

Among the other highlights listed for the quarter was customers’ “strong response” to TalkTalk’s new quad-play offering, and its new multi-year MVNO agreement with Telefonica UK to support this.

“Today’s results demonstrate the strong and growing demand for our value-for-money products, as we saw our strongest ever quarter of TV, mobile and fibre adds with our lowest ever reported churn,” said TalkTalk CEO Dido Harding.

“We are excited about the future of quad-play. TalkTalk is ideally positioned to push home its strategic advantage in an industry undergoing major changes. Our customers recognise the significant savings they can make on all four products from TalkTalk.

“We remain confident in our plans for delivering sustainable growth and a more profitable business over the medium term, and remain on track to deliver our FY17 targets.”