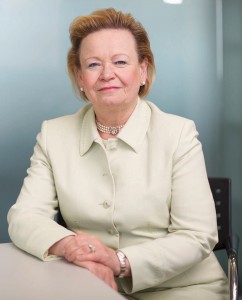 Ofcom deputy chair and Conservative peer Baroness Sheila Noakes has acknowledge that her activity on microblogging site Twitter was “not appropriate” to her role and has agreed to dispose of a controversial shareholding in US telecom operator Verizon after Harriet Harman, the UK Labour Party’s deputy chairman and culture, media and sports spokesperson, wrote to culture secretary Sajid Javid to call for her removal.

Harman called for Javid to reconsider Noakes’ appointment on the grounds that the Conservative party peer’s conduct is in clear breach of Ofcom policy.

In her letter, Harman says that the appointment of Noakes was “a party political appointment” and that Noakes’ activity as a Conservative party spokesperson in the House of Lords and public pronouncements are not compatible with Ofcom impartiality rules.

“Baroness Noakes continues to take the Conservative whip in the House of Lords.  Since 2010, acting as a spokesperson for the Conservative Party, she has sat on seven committees in the House of Lords.  On the face of it this is not in compliance with Ofcom policy,” said Harman, constrasting Noakes’ behaviour with that of former Ofcom CEO Ed Richards and BBC director of strategy and digital James Purnell, both of whom resigned from the Labour Party when they were appointed.

“But it is not as though she has just failed to resign the whip.  There are also clear breaches to be found on Baroness Noakes’ twitter account (she tweets as @1SVN),” Harman’s letter continued.

Harman cited a number of Tweets including one posted on January 21 that read “Further fall in UK unemployment. #LongTermPlan still delivering.  Must not let Labour back to destroy progress” and one on Januar 21 that read “Be afraid. Be very afraid if @ed_miliband and #Labour get back into power”.

Harman also pointed out that Noakes continues to hold shares in US telecom operator Verizon Communications, which could lead to a potential conflict of interest.

“Given the number of breaches of Ofcom policy and the clear bias that Baroness Noakes has shown at a personal and professional level, I would ask that you reconsider Baroness Noakes’ position as Deputy Chair of Ofcom as a matter of urgency.  I ask that you write to me about this matter immediately,” Harman’s letter concluded.

In her response Harman’s letter, Ofcom chair Patricia Hodgson said that Noakes “acknowledges that the political nature of some comments on her personal Twitter account were not appropriate form someone who is a member of the Ofcom Board” and has “agreed with me to refrain from public comments of a political nature”.

Hodgson said that Noakes had declared the Verizon shareholding with Register of Interests in the House of Lords but that, “to ensure absolute transparency”, she had now agreed to dispose of the shares.

Noakes was appointed to Ofcom for a four-term in June last year. In the Ofcom register of disclosable interests that could be affected by the regulator’s decisions, she listed that she was a non-executive director of the Royal Bank of Scotland and deputy chairman of Carpetright.