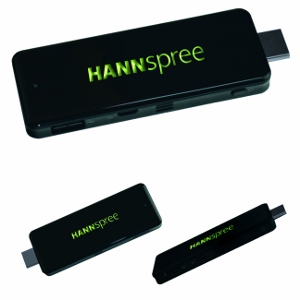 Consumer electronics provider Hannspree has launched a new ‘micro PC’ in the form of an HDMI dongle, which it says can turn any HDMI-compatible devices into a Windows 8 PC, including touch-screen functionality for devices with that capability.

The device, which retails for £169 (€221), will additionally be marketed as an ‘all-in-one’ PC together with a selection of HannsG touch-screen monitors.

The device is aimed both at the enterprise and consumer markets, and according to Hannspree can enable users to upgrade HDMI TVs into smart media PCs capabile of playing back full resolution HD movies and shows from online sources.

The device features a Quad-Core Intel Atom processor and 2GB of RAM. The dongle is equipped with 32GB of eMMC internal memory that allows storage of music, videos, applications and data content.

Separately, Stone Group has introduced its own Intel Atom-based, Windows 8.1-enabled device, retailing for a reported £100. The dongle comes with 32GB of internal storage, 1GB or RAM, Bluetooth and WiFi connectivity and a microSD card reader. According to Stone, the device will be marketed with a range of educational software bundles.

Intel showcased its own devices at the CES 2015 show earlier this month.