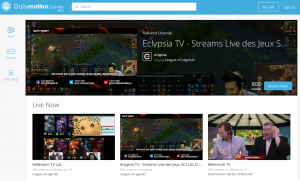 The website, Dailymotion Games (games.dailymotion.com), based on Dailymotion’s video and live-streaming technology, offers an environment for viewing, sharing, uploading and streaming personal gaming and gaming competitions, according to Dailymotion.

Dailymotion said that gaming content on its site currently generates more than 180 million video views per month and, according to comScore, attracts more than 11 million unique visitors per month globally.

The site allows live streamers to create live streams, monitor them through a dedicated control panel and make revenue from their content via user-controlled video advertisements.

General users can discover and find content by using the site’s recommendation engines, search bar, and filtering tools. Dailymotion has also provided a chat system to accompany all live streams to allow for real-time conversations between live streamers and viewers.

“Since 2011, with the first Dailymotion Cup on Starcraft, Dailymotion has accompanied eSport growth on the Internet.” said Martin Rogard, Dailymotion’s chief operating officer.

“Dailymotion Games is entirely dedicated to eSports fans and streamers who come together every evening to form an amazingly talented and gregarious community. Over the coming months, we will significantly increase our investment in the eSport domain to ensure worldwide recognition of all our talented content producers.”