Netflix to give Marco Polo a second run 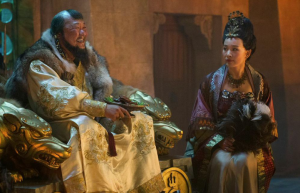 Netflix’s big-budget action adventure series Marco Polo has been handed a second run less than a month after season one debuted.

The show, which follows famous explorer Marco Polo’s early days in the court of Yuan dynasty Emperor Kublai Khan in the 13th century, launched on December 12 as the streaming service’s latest original.

Tina Fey’s Universal Television comedy Unbreakable Kimmy Schmidt, which Netflix picked up after NBC dumped it, will launch on March 6; while family drama Bloodline, which is from Sony Pictures Television, premieres on March 20.

Marvel’s Daredevil, from Marvel Television, then follows on April 10, with Skydance Productions’ irreverent comedy Grace and Frankie rounding off the launches on May 8.

On the kids content front Netflix launches episodes of The Adventures of Puss in Boots on January 16 in selected territories, as TBI reported this week, followed by a global debut for Ever After High: Spring Unsprung on February 6 and the second season of Mako Mermaids to launch on North America, Latin America, UK and Ireland, the Nordics and Benelux on February 13.