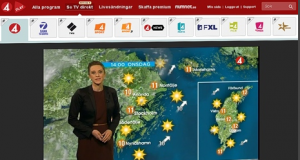 According to the broadcaster, traditional TV viewing declined by about six minutes a day to 153 minutes on average. However, consumption on digital platforms took the total average daily viewing time to over four hours.

Public broadcaster SVT’s player service SVT Play is still the market leader, but requests for the service fell from 405.7 million in 2013 to 337.8 million this year.