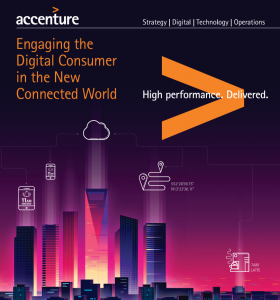 The pace of growth in sales of video display devices including HDTVs and tablets could be set to slow down as the market matures, while consumers are becoming excited about new devices including wearable and smart home devices, according to a survey by Accenture.

According to the survey, the market for the big four is still healthy, but maturing rapidly. Some 36% of consumers intend to purchase an HDTV over the next year. However this figure is eight percentage points down on last year. Smartphones remain the item consumers are most likely to purchase in the coming year, with 54% saying they intend to buy a device. However, this figure is also 4% down on last year. Thirty-eight per cent and 36% said they intend to purchase a tablet and laptop respectively, down 6% and 5%.

The market for non-HD TV sets meanwhile looks set to collapse completely, with only 1% of consumers saying they intend to purchase one, down 16% on last year.

Overall, most consumers plan to spend the same as last year on consumer electronics, according to Accenture. However, among consumers planning to change their purchase habits, a greater percentage – 20% – plan to decrease than increase their spending – 16%.

Plans to purchase new devices such as smartwatches and other wearable devices is increasing from a low base. About 7% of survey respondents claimed to own a smartwatch, with 12% intending to purchase one in the next 12 months.

Accenture found that consumer satisfaction with new smart devices such as wearables is low, with 83% of those purchasing such devices finding them either difficult or complicated to use or set up properly, or finding they did not work as advertised. Consumers also showed concerns about data security and privacy, with up to 54% either not confident at all or not always confident that their data security is protected.