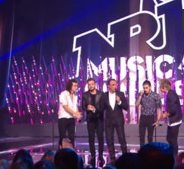 The Cannes event was by a giant screen that featured ive infographics on the digital activity created around the event such as trending hashtags, number of tweets and related images.

Throughout the awards ceremony, presenter Nikos Aliagas read out a selection of the best tweets of the night. The most popular stars and performances in terms of number and quality of tweets also appeared on a giant leader board screen on stage.

Ionoco’s system provides a web-based aggregation and moderation function that enables it to pull down Tweets related either to the awards show or the featured bands. These are then made available to be used in a range of feeds, which are pushed through to producer consoles for publishing to air.

The Tweets are used live on set throughout the performances, fed through to LED screens featuring Tweet walls, live Tweets and leader boards. The latter automatically calculates the total number of Tweets posted for each band, along with the rate at which they are generated during the performances.

“Our social-media tool has been used with great success on a number of primetime shows in the US, the Middle East and, now, Europe. It’s a massive honour to be asked to work with TF1 on a show as popular and prestigious as the NRJ Music Awards,” said Simon Ingram, CEO of Ionoco.

“We believe this will be the first of many great television projects with Twitter at their heart.”