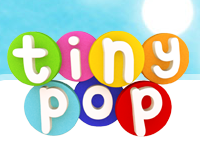 The channel will go live on January 7, 2015, on Freeview channel 126. The network’s older-skewed sister channel, POP, already occupies the 125 slot.

“This extended distribution on Freeview marks our commitment to continue to invest in our UK networks business,” said Kate Marsh, SPT’s executive VP, networks, Western Europe. “With the extension of Tiny Pop, SPT’s reach on Freeview now spans five channels, and the introduction of this well-loved and established channel enables us to deliver a quality and fun alternative forfamilies in Freeview homes.”

Tiny Pop runs shows such as My Little Pony: Friendship is Magic and Care Bears: Welcome to Care-a-Lot, and also has programming that aims to mimic the flow of a preschool child’s day.

Tiny Pop has run on UK satellite TV since 2004, and is currently on Sky, Virgin Media and Freesat.