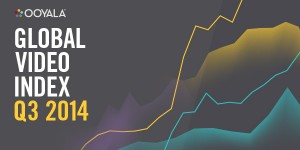 The proportion of online video views done on smartphones and tablets has grown by more than 400% in the past two years, according to new research by Telstra subsidiary Ooyala.

“At this rate, Ooyala predicts that mobile and tablet viewing will reach 50% of all online views by late 2015,” according to the research.

“Viewers increasingly are turning to the Internet for their daily content, driven in large part by increased access to premium and live video content, especially international sporting events and news of all sorts. The result is unprecedented growth rates in mobile and tablet video consumption.”

The report also noted “substantial growth” in long-form video consumption across devices and said that connected TVs – whether connected directly to the web or via game consoles and other devices – were central to long-form content consumption.

“Cloud-based TV has arrived. Broadcasters and content providers realise that, with the right approach, IP-delivered content can be more economical with higher return in terms of building and monetising audiences, compared to linear TV,” said Ooyala CEO Jay Fulcher.