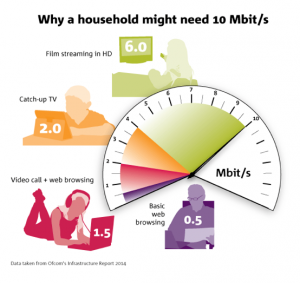 After years of consecutive growth, the number of UK  households with a TV set has fallen for the first time as viewers increasingly turn to other devices, according to new research by Ofcom.

“There are now nearly one million homes with broadband but no TV. Catch-up content in particular is growing in importance and being consumed on devices such as tablets, smartphones, computers and games consoles,” said Ofcom.

On average, people in the UK watch around four hours of television a day, with live linear viewing remaining the main way of consuming TV, according to Ofcom.

However, the level of TV viewing reduced by approximately 4% in 2013, with Ofcom claiming it is “not yet clear whether this was the beginning of a longer-term trend or merely a temporary variation.”

Among those aged 16 to 24, only half of viewing is spent on live linear TV.

Other findings of the report were that a typical UK household may now need a broadband connection offering at least 10 Mbit/s, as the amount of data consumed over residential broadband is growing at “an unprecedented rate.” Ofcom also said that more work needed to be done in relation to mobile coverage and quality of service.

“Digital infrastructure is crucial to the UK’s future. As a country we are continuing to make real progress, particularly in the roll out and take-up of superfast broadband and 4G mobile services. But there is more to be done. We need to continue asking whether collectively we are doing enough to build the infrastructure of the future, and to maintain the competition that benefits consumers and businesses,” said Ofcom CEO Ed Richards.