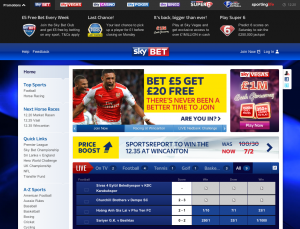 Sky has agreed to sell a controlling stake in Sky Bet to CVC Capital Partners, in a deal that puts an £800 million (€1 billion) valuation on its online betting and gaming business.

Sky said that the deal will let an enlarged Sky “focus on the significant opportunity for growth in pay TV across the five markets in which it now operates.”

Under the terms of the deal, Sky will receive £600 million in cash on completion and a further deferred consideration of up to £120 million.

Sky will retain an equity stake of approximately 20% in Sky Bet and will continue to be represented on the board. As part of the deal, Sky has also entered into a long-term brand licence agreement with Sky Bet.

Sky said that the £800 million total valuation for Sky Bet is roughly fifteen times the business’ EBITDA for the 12 months ended 30 June 2014.

“In the last ten years, we have successfully grown Sky Bet from a start-up to one of the leading online betting and gaming companies in the UK. This transaction will allow us to focus further on the substantial growth opportunities in our core international pay TV business while realising significant value for our shareholders,” said Sky Group CEO Jeremy Darroch.

Sky Bet’s management team, under the leadership of managing director Richard Flint, will remain with the business under the new ownership structure. All Sky Bet’s employees will move across into the new entity, and the business will remain headquartered in Leeds, said Sky.

The deal comes less than a month after BSkyB completed its takeover of Sky Italia and Sky Deutschland, with the new combined company known simply as Sky.