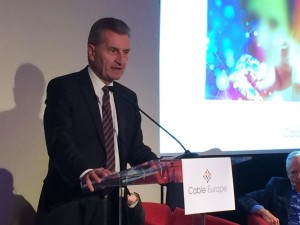 Rules governing net neutrality in the EU as part of the Telecom Single Market will clearly need to give service providers room to develop services including IPTV that need “a certain transmission quality in order to work”, according to Günther Oettinger, the EC’s digital economy and society commissioner, speaking at a reception held by cable association Cable Europe.

“In an open internet everyone should have access to services and applications without being blocked. Content and application providers will have guaranteed access to end-users,” Oettinger told attendees at the Cable Europe gathering.

“At the same time, we need a balanced approach: on the one hand no blocking or throttling of online content, applications and services, while at the same time guaranteeing efficient network management, and leaving space for continued network and service innovation.”

Oettinger said that finding this “balance” is subject to ongoing discussion between legislators.

Oettinger also said that plans for a digital single market would be included in the Commission work programme in mid-December, with the aim of presenting the strategy for a European Digital Single Market in the first half of next year.

“I think everyone in this room would agree on the need to complete the digital single market for the simple reason that it will make life easier – and more profitable – for businesses throughout the EU,” said Oettinger.

“You don’t have to be an industry expert to understand that breaking down virtual barriers, and cutting red tape, will reduce administrative burdens which might be hindering businesses from expanding or doing business across all the EU.”

Oettinger hailed a raft of measures recently announced by the EC that he said would enable broadband development, including presiden Jean-Claude Juncker’s announcement last week of a €315 billion investment plan, the European Fund for Strategic Investments (EFSI), which he said would be “good news for broadband and digital infrastructure projects which can be financed through financial instruments”.

Oettinger also said that the revised EC Recommendation on Relevant Markets Susceptible to Ex-Ante Regulation adopted in October and the redefinition of broadband markets so that virtual access products can be considered to be substitutes to physical unbundling in certain cases would deliver benefits to operators.