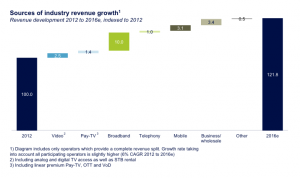 European cable executives expect the sector to grow by 6% a year until 2016, with EBITDA expected to grow to 51% of revenue on average by that year, according to research by Solon Management Consulting.

The growth expectation is higher than that revealed by the last Solon survey, which found that top execs expected revenues to rise by 5% a year.

According to the sixth Solon Survey of European Cable Communication, based on a survey of 14 leading operators across 12 countries, growth will be driven primarily by broadband, with cable taking advantage of its ability to deliver higher top-line speeds than rival service providers.. The primary marketed bandwidth of European cable operators was on average 48Mbips in the first half of 2013. By 2016, cable players expect this value to increase to over 150Mbps.

Despite the emphasis on broadband, next-generation TV is the focus of the industry’s attention currently, which is seen as a defensive move as TV value growth is forecast to be limited and will suffer from competitive pressure.

Going forwards, cable executives expect B2B services to be the main new value driver, but there are signs that the industry is still struggling to win business from small and medium enterprise customers. While 44% of participants reported high B2B success regarding SoHo customers, none of the participants reports similar success with SMEs
Capex as a percentage of revenue is expected to decline sightly from 22% this year to between 19-20% of revenues.