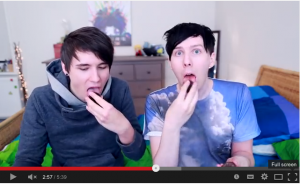 The UK’s Advertising Standards Authority has called for YouTube video bloggers to be clear upfront if they are being paid to advertise products, after finding a host of YouTube stars in breach of ad standards.

The ASA found that food company Mondelez and YouTube stars including Dan and Phil, Emma Blackery and Tom Ridgewell, aka TomSka, were in breach of the non-broadcast advertising, sales promotion and direct marketing code (CAP Code) after ads for Oreo were not sufficiently flagged.

Though the YouTube stars made reference to the fact that they had been approached by Oreo to take part in a “lick race” challenge – to lick cream off an Oreo cookie as fast as possible – in their videos, the ASA deemed that as the ads were on video channels that were usually editorial based, the commercial intent should have been more clearly flagged.

“It’s important that we understand when we’re being marketed to so that we can make informed decisions about what we’re being told. Plus if it’s appearing in a format that we’d normally expect to be non-promotional, we should be told up front about whether it’s an ad so that we can decide whether we want to continue viewing. In simple terms, it’s not fair to falsely promote a product,” said the ASA.

“It’s perfectly legitimate for vloggers (or bloggers, tweeters etc) to enter into a commercial relationship and be paid to promote a product, service or brand. We’re not here to regulate that relationship or to stop vloggers earning money. But when that commercial relationship is in place then the onus is on the advertiser, and by extension the vlogger, to be upfront about it and clearly disclose the fact that they’re advertising.”