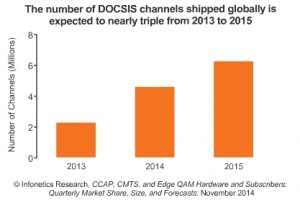 DOCSIS channel shipments came to 1.2 million units in the third quarter, up 95% year-on-year despite being down slightly on a sequential basis, according to Infonetics Research.

“This reflects just how much the cable companies are investing to support higher-bandwidth services such as IP video and to compete with fibre,” said Jeff Heynen, principal analyst for broadband access and pay TV at Infonetics Research.

The ‘CCAP, CMTS, and Edge QAM Hardware and Subscribers’ report claims that global revenue for CCAP, CMTS, edge QAM, and CMC equipment totalled US$445 million (€358 million) in 3Q14, up 8% sequentially. CCAP revenue alone increased 7% quarter-over-quarter in Q3 to US$360 million, which Infonetics said underscored the “tremendous shift from CMTS to CCAP platforms over the last few quarters.”

“Nowhere is the current shift to CCAP being felt more acutely than in North America, where cable operators are focusing on deploying new hardware. Arris, Casa Systems, Cisco, and Harmonic (in alphabetical order) held steady at the top of the combined CCAP, CMTS, and CMC market in 3Q14,” said Infonetics.